TLDR: A year ago, I noticed that there are very easy-to-spot vulnerabilities on Windows third-party applications that lead to local privilege escalation. I developed an automation solution that browses the web looking for Windows applications, downloads and installs them, and then performs some static scans on the system after installing the targeted software. When it finds vulnerable software, it sends notifications to Slack. Using this project, I was able to find more than 40 LPE vulnerabilities and 5 CVEs in a very short period. I called this project Miner: GitHub Repository. This post briefly talks about the project and shows how to start employing it.

The tool is designed for large scans. For example, when a company like Logitech starts a bug bounty program, it’s hard to go over all their Windows Programs and drivers. An efficient way to find as many bugs as possible in a short period of time is to use an automation tool like the one introduced here to download all Logitech drivers and Windows applications, then perform scans on them after installation, and finally generate a report for each executable.

Basically, the solution I am offering downloads every executable it finds on given FTP servers or Github & GitLab repositories, then it performs its analysis and generates a report of the findings.

Let’s look at the project’s environment and dynamics before getting into the details. The main host is a hypervisor running ESXi with vCenter; however other hypervisors could be used depending on preference. I also used two VMs, one to download binaries and the other one to start RDP sessions, and I will explain the idea of the RDP sessions later. I also used a Windows instance with WinRM enabled, where the tests will be performed. It’s not essential to have a Git server, but in my case, I deployed a Gitlab server to backup the generated reports. Finally, a Slack channel to receive alerts when a new vulnerability is found. The following diagram shows the relationships between all the mentioned servers. 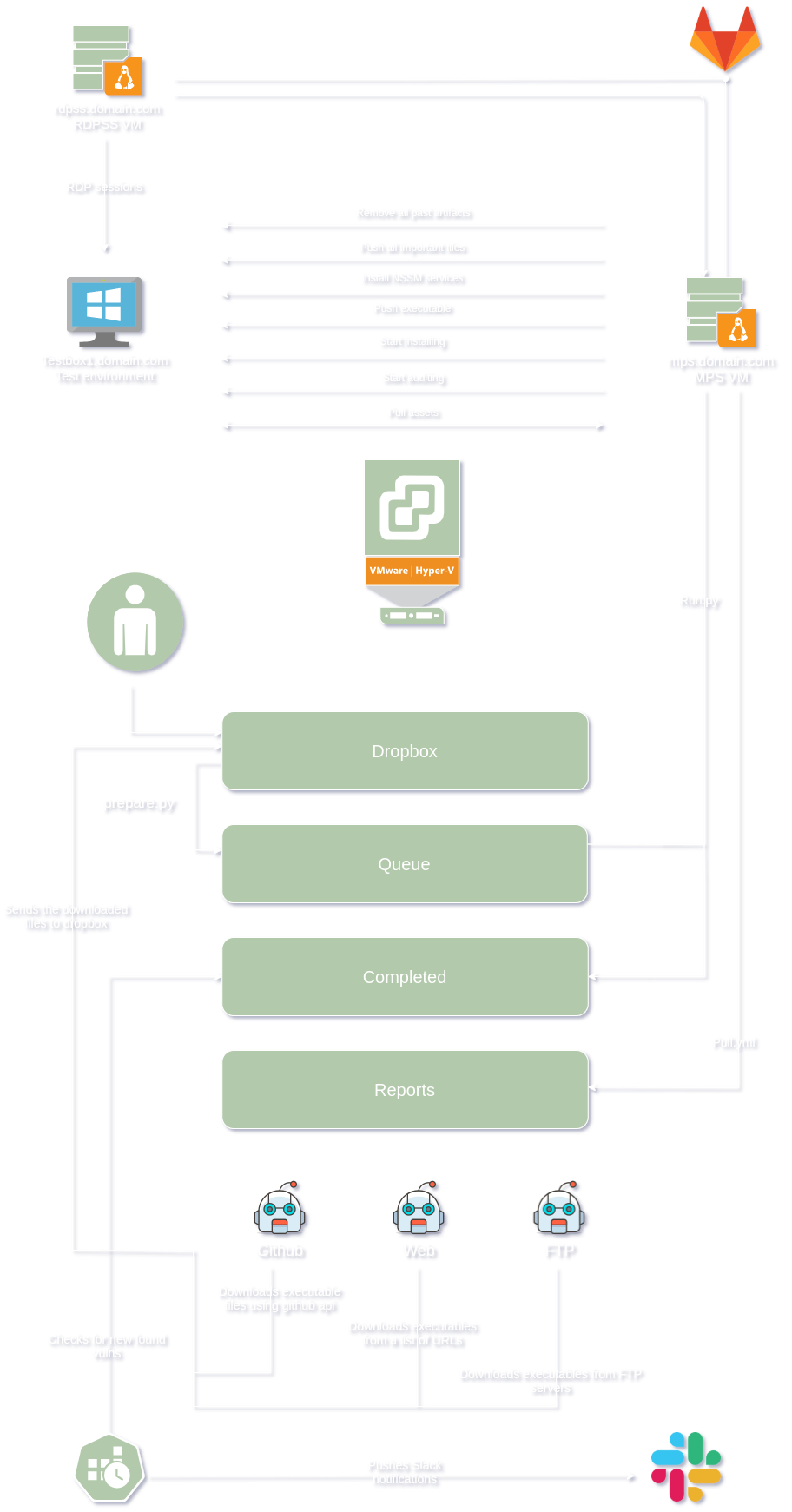 Refer to the diagram above when needed. The following section shows the environment used to run the project and the details of each VM.

It is the server that will browse the internet looking for Windows applications and store them. It does this using multiple processes to find applications, which will be explained later. While looking for Windows applications and storing them, MPS.domain.com will have the main script that runs everything else. This main script is called “run.py.” Run.py is the script that controls testbox1.domain.com using WinRM via Ansible. Run.py has three lists; dropbox, queue, and completed. Dropbox is where the “multiple processes” I mentioned above copy the files to and where I drop files that I want to analyze. The queue folder contains the binaries that are waiting to be analyzed. Compiled is where I store the name of executables that the Miner has analyzed. These are the main things that you need to know now. There are more shenanigans that I will explain later.

This server is a CentOS Linux release 7.9.2009 server that uses a Remmina configuration file to create RDP sessions in testbox1.domain.com when mps.domain.com requires.

The virtual machine where the analysis happens. MPS.domain.com installs the executables in queue and then run scripts like PowerUp.ps1 in testbox1.domain.com to find vulnerabilities like:

In Miner, scripts like PowerUp.ps1 are the scripts that analyze the testboxN.domain.com VMs after installing the targeted binaries. You can customize your test in the form of PowerShell, Batch, or whatever scripting language you prefer and add them to run_startauditing.yml. Simple scripts can be beneficial. For example, show_all_tcp_listening_ports.ps1 lists all newly opened TCP ports. It might not seem like a big deal, but it tells us that the targeted binary has opened sockets, and it can be fuzzed or even manually tested. Other simple scripts can look for easy-to-spot vulnerabilities like credentials management, key management, and filesystem sensitive data exposure vulnerabilities.

A GitLab instance that should have mps.domain.com’s ssh public key to backup the analysis reports.

How Do They Work With Each Other

How to Start Mining

First, I will start by explaining the flow. Everything starts from Run.py on MPS.domain.com. Run.py uses two modules; the first one is called main, and the second module is main_keys. Each module utilizes a method to install the targeted application. The Main module uses image recognition to find the “next” and other buttons to install Windows applications. Basically, the Main module uses the stored screenshots of some buttons and tries to find them and click them when possible. The other module is Main_keys, which tries a sequence of actions until it installs the software. Every time the function run(file_name, modules) runs, it uses a different module to minimize failure during the installation process. When adding a new module, the only thing needed is editing run(file_name, modules) and adding the new module in the modules list. The following code is an example of how Run.py should be.

To start running the project, begin by copying the following instructions.

Fork the project from:

I do not recommend removing the lists that I already published. If you do so, you may retest the same binaries that I have already tested. After forking the project, clone your new fork in your MSP.domain.com.

Change the variables in the next files according to your environment. vars.yml should have the vCenter credentials and the name of the VM that will be cloned in each new analysis.

projectdir/Miner/notifier/.env file needs only one change. Change VULNSCANNERS to your webhook channel.

Apply these commands to install Mps.domain.com dependencies. I am assuming that you are using CentOS Linux release 7.9.2009 (Core) as Mps.domain.com:

MPS’s firewall settings so RDPSS.domain.com can access mps.domain.com, make sure you have the right range or IP:

To manually debug MPS scripts, use the next commands:

To manually debug Ansible, use the next commands:

Since we are using Ansible, you need WinRM to be running, and you need to create a new user without any admin privileges and add it to the WinRM group so Ansible can use it. Make sure that the Administrator and lowprivuser users are activated in the testbox1.domain.com server.

Turn off Windows UAC, so it doesn’t break the image recognition scripts.

Start an admin powershell windows and then install Chocolatey and NSSM:

Finally, download PsExec from Link and copy it to this path /system32/.

Now, you can take a snapshot of the VM, but make sure you test the access of the low privilege user you created in the above steps.

Copy every file in /Miner/RDPSS/Linux/* from your fork to your RDPSS VM.

Install Remmina, sudo apt install remmina remmina-plugin-vnc -y. Then, make sure Remmina’s binary exists at /usr/bin/remmina. Then, execute rdpss.sh. The first time you use the script, it will ask you to enter the password of the test VM. Make sure you ask Remmina to remember the credentials or use the attached file windows.remmina after editing the username and passwords.

Finally, finish the RDPSS.domain.com setup by taking a snapshot. Make sure you take a snapshot while rdpss.sh is running. In case something goes wrong, you don’t need to interact with RDPSS. In unexpected failures, you just need to revert RDPSS.domain.com and nothing else.

The following screenshot is an example of Windows Unquoted Service Path vulnerability:

Whenever Miner finds a vulnerability, it uses the existing templates in notifier/ and generates a new issue; the rest is up to you to find the vendor online and email them or sometimes you can directly report the vulnerabilities on GitHub or GitLab. 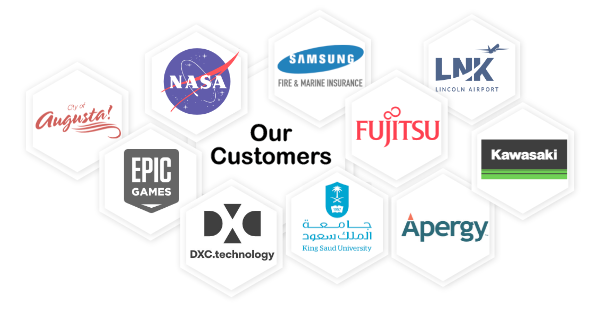 For the rest of the vulnerabilities, I tried to contact the developers and vendors of the products, but some of them didn’t respond, and some just ignored the issues or replied like this:

The findings were “mined” in approximately 15 days. Even though a significant part of the process is automated and there is no interaction needed during the analysis phase, reporting, keeping track of the issues and emails, and explaining the problems to the developers are time-consuming tasks. Also, reporting vulnerabilities for free is not very motivating, but in general, I recommend running it for a bit if you have the time and the hardware resources. I am sure the internet is full of applications that have easy-to-spot vulnerabilities.

Everything in this post and Miner’s repository focuses on automated static analysis. No dynamic testing was performed.